Antifragile by Nassim Nicholas Taleb uses a systems thinking approach to understand the world, through the lense of fragile and anti-fragile traits. He argues the key to resilience is embracing volatility, being adaptable, learning from mistakes, and having a plan for adversity or uncertainty. These traits are critical components of an anti-fragile system, whether that is an economy, ecological or biological system, an investment strategy, or a business plan. Shocks to the system are inevitable, so the people and systems designed to withstand change will persevere. 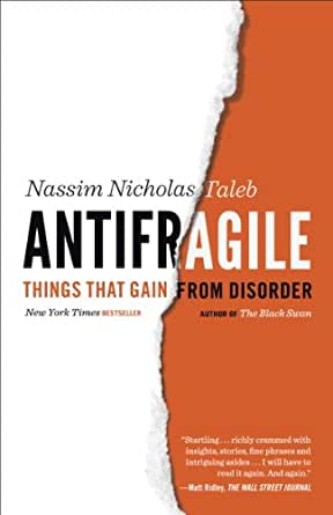 My key Takeaways from Antifragile by Nassim Nicholas Taleb:

Fragile items break when put under stress but antifragile items benefit from harm, shock, and volatile situations. It's this antifragility that has fueled human progress through the ages so don't shy away from the bumps and bruises that life throws at you, embrace them and learn to manage them.

In order for a system to be antifragile it must have some fragile components. Natural and biological systems are usually antifragile since they are incredibly complex and can self-improve through trial and error (just take evolution as an example) whilst man made items are usually fragile which the exception of a few artificial systems man has created such as the economy.

Every antifragile system must have some components that die in order to make the system stronger. In evolution that can be seen with extinction whilst the economy can only become stronger due to some of its components (businesses) failing. In our unpredictable and volatile world, every antifragile system has to be able to learn from its mistakes because tranquility leads to fragility.

Antifragile systems can be difficult to understand due to their complexity and unpredictability but you don't need to be educated to take advantage of them, you just need to know when to seize the opportunities and how to manage the risks.

It's no good trying to avoid being antifragile as it just doesn't work – everyone will go through times of uncertainty and vulnerability at some point in their life whether that's due to a natural disaster, an economic collapse, or other crises. The trick is to accept that there will be both good times and bad times and to domesticate the uncertainty rather than ignore or attempt to avoid it. Essentially you need to have a plan in place so that when volatile shocks do hit you, you swim rather than sink. Using the economy as an example, antifragile people ensure that 90% of their assets are safe from potentially disastrous risk ie an unexpected market collapse. The other 10% of assets are used in highly volatile areas where the individual might hit gold but if a shock does hit, they haven't risked and lost it all.

Takeaway #4: The Dangers of Eliminating Volatility

Today, we often undervalue antifragility, attempting to remain in the space between positive and negative, that 'safe ground'. The government tries to intervene in the volatile cycle of boom and bust in order to control the economy to make it more tranquil and efficient but they do more harm than good - Volatility is vital for antifragility so when it is removed or contained, problems lie dormant under the surface, growing bigger and bigger until one day they explode.

Another problem we humans suffer from is predicting the future using a false narrative of the past and creating contingency plans based on past events, not thinking that a bigger more devastating event could happen tomorrow. Just take the Fukushima nuclear reactor for example – it was built to withstand the biggest earthquake that we had ever experienced at that time with no thought that a bigger earthquake could and did happen in 2011.

We can't predict the future but we can prepare for it by making ourselves antifragile, remembering that volatility is what keeps us strong and tranquility is what makes us weak.

Chapter One - Between Damocles and Hydra
Chapter Two - Overcompensation and Overreaction Everywhere
Chapter Three - The Cat and the Washing Machine
Chapter Four - What Kills Me Makes Others Stronger
Chapter Five - The Souk and the Office Building
Chapter Six - Tell Them I Love (Some) Randomness
Chapter Seven - Naive Intervention
Chapter Eight - Prediction as a Child of Modernity
Chapter Nine - Fat Tony and the Fragilistas
Chapter Ten - Seneca's Upside and Downside
Chapter Eleven - Never Marry the Rock Star
Chapter Twelve - Thale's Sweet Grapes
Chapter Thirteen - Lecturing Birds on How to Fly
Chapter Fourteen - When Two Things Are Not the "Same Thing"
Chapter Fifteen - History Written by the Losers
Chapter Sixteen - A Lesson in Disorder
Chapter Seventeen - Fat Tony Debates Socrates
Chapter Eighteen - On the Difference Between a Large Stone and a Thousand Pebbles
Chapter Nineteen - The Philosopher's Stone and Its Inverse
Chapter Twenty - Time and Fragility
Chapter Twenty-One - Medicine, Convexity, and Opacity
Chapter Twenty-Two - To Live Long, but Not Too Long
Chapter Twenty-Three - Skin in the Game: Antifragility and Optionality at the Expense of Others
Chapter Twenty-Four - Fitting Ethics to a Profession

My Favorite Quotes from Antifragile

"Never ask the doctor what you should do. Ask him what he would do if he were in your place. You would be surprised at the difference"

"Some things benefit from shocks; they thrive and grow when exposed to volatility, randomness, disorder, and stressors and love adventure, risk, and uncertainty."

"Remember that food would not have a taste if it weren’t for hunger; results are meaningless without effort, joy without sadness, convictions without uncertainty, and an ethical life isn’t so when stripped of personal risks."

"Antifragility is beyond resilience or robustness. The resilient resists shocks and stays the same; the antifragile gets better."

"Difficulty is what wakes up the genius"

"Trial and error is freedom... Only the autodidacts are free."

"The more energy you put into trying to control your ideas and what you think about, the more your ideas end up controlling you"

"I want to live happily in a world I don’t understand."

"Abundance is harder for us to handle than scarcity."

"He who has never sinned is less reliable than he who has only sinned once."