“Can’t Hurt Me" by David Goggins is a must-read for anyone who loves to root for the underdog. David tells his story of how hard work and determination allowed him to transform his life from one of poverty, depression, underachievement, and ill health into a career as a world-class personal trainer and elite athlete. David paves a path for anyone looking to chase their dreams, by revealing his secrets for success.

If you’ve ever experienced discrimination or trauma, “Can’t Hurt Me” by David Goggins will appeal to you. As a child, he dealt with poverty, discrimination and physical abuse. Suffering with depression and eating himself silly, he decided to make a change. He remains the only man to complete the level of physical training that he has, as a Navy SEAL, Army Ranger and Air Force Tactical Air Controller. In this book, you’ll learn how to use perseverance and resilience, as well as a tonne of hard work, to become the person you want to be.

In this book, you’ll go on a journey with the author, David Goggins, as he tells his incredible life story. He will share with you his story of going from childhood obesity to being not just a healthy adult, but one of the world’s fittest soldiers. He’ll share with you how he achieved the near-impossible and will show you how you can do the same.

The key message in this book is that Goggins never gave up. Before joining the army, Goggins lived in an impoverished and violent neighborhood. He accomplished his goal of joining the army through lots of discipline. Goggins would eventually become a Navy SEAL and a successful ultramarathon runner. He shares lots of advice with the reader such as his 40% rule, that is that most of us only give 40% of our potential effort. We should ignore the urge to give up and give the remaining 60%.

Can't Hurt Me in Nutshell

Goggins had an abusive father who made his childhood traumatic, and after his escape was subject to severe poverty. As a result, in third grade Goggins developed toxic stress. This affected his memory, which grossly impacted his school performance. He set sights on the Air Force, taught himself to read but fear overcame him when he needed to learn to swim, and he quit. He used food as a comfort, and gained considerable weight. Goggins saw an advert for the SEALS, and pursued this. He needed to lose over 100 pounds in 3 months. He lost this weight through sheer determination, and became a Navy SEAL. Once a SEAL, he wanted a new challenge, so he took up ultra running for charity. He completed ultra marathons. Now an idol for many, Goggins emphasises the necessity of hard work over quick fixes. 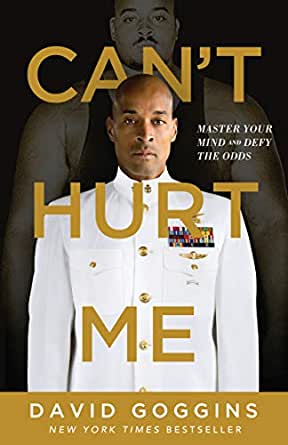 Summary of Can't Hurt Me by David Goggins

The true story of one of the most determined and fittest military men in the world, learn how David became unbreakable, living life without excuses.

Born in 1975 in New York, David's early childhood was far from joyful, himself, his Mother and older Brother having to work tirelessly at the family-owned roller-disco rink, working until midnight most nights. Having to sleep in the office, not easy with the loud music from the rink, he would often fall asleep at school. But that wasn't the worst, David's Father was abusive to him and his Mother, beating the pair with a belt whenever they defied him. This miserable existence continued until David was 8 years old when his Mother managed to escape with David to start a new life in Indiana.

Unfortunately, David's new life wasn't free from hardships, himself and his Mother now entering into a life of poverty and David experiencing the results of extreme toxic stress with alopecia, vitiligo (a condition where the skin loses its pigment resulting in discolored patches of skin), a nervous stutter, and memory problems. Not being able to remember what he'd learned at school meant he was labeled 'dumb' by teachers and being the only African American child in the class didn't help matters. To avoid being sent to a special needs school, David began to cheat with his homework and on his tests, the teachers not realizing or not caring that as David approached his adolescent years, he could barely read.

As a teenager, David was still struggling at school until the desire to join the United States Air Force and become part of the pararescue team took hold. This desire made him buckle down at school and learn to read. He was accepted into Air Force training but his inability to swim was one test too much and he quit training, using his diagnosis of sickle cell anemia as his get out card.

In 1999, aged 24, David found himself working as a night shift pest exterminator and using food to numb his feelings of hopelessness. Weighing 255 pounds when he left the Air Force training, his weight had shot up to nearly 300 pounds as he tried to escape the harsh reality that he was in a dead end job with no way out since he was uneducated and unskilled.

Watching a documentary about Navy SEALS in training gave David the motivation to begin to turn his life around, inspired by the mental toughness of the young men he saw on TV. His desire to be in the military was back and this time there was no stopping him.

His first challenge was to lose more than 100 pounds within 3 pounds in order to get onto the SEALS training programme. A grueling fitness regime saw him getting up at 4.30am and spending 2 hours on the exercise bike before hitting the pool for 2 hours followed by the gym and then more time on the exercise bike. After 2 weeks and a 25 pound weight loss he added 4 mile runs to his workout regime. He made the SEALS training program and after weeks of intense training achieved his ambition.

In 2005 David found himself in need of new challenges, something new to test his fitness to the limits – Extreme long distance running aka ultra running was his answer. He went on to complete the hardest foot race in the world, the Badwater 135 mile race, raising money for charity along the way and finishing in 5th place.

Goggins is one of only a few African-American SEALS and ultra-runners. When asked how he became so successful, he contributes it to work ethic. Goggins says that passion and talent are not enough. You must have a work ethic. Without a work ethic, you are a bird without wings and will never fly. Everything comes second to Goggin’s goals and working hard is his priority in life. Often, the response he will get is that the person can’t commit the time needed to be successful because of family obligations. Goggins answer is to “win the morning”. In other words, become an early bird. Goggins starts his day at 4 a.m. with a run. He makes the best of all of his time. For example, at lunch break, he takes a run and rides his bike to and from the office instead of driving. Goggins says that he did it and you can, too.

Apply What You Read

Click Below to get a free workbook of one of my top recommended books of all times, filled with in-depth insights, action points and self exploration exercises.

Get a Free Workbook

Chapter One - I Should Have Been a Statistic
Chapter Two - Truth Hurts
Chapter Three - The Impossible Task
Chapter Four - Taking Souls
Chapter Five - Armored Mind
Chapter Six - It's Not About the Trophy
Chapter Seven - The Most Powerful Weapon
Chapter Eight - Talent Not Required
Chapter Nine - Uncommon Amongst Uncommon
Chapter Ten - The Empowerment of Failure
Chapter Eleven - What If?

My Favorite Quotes from Can't Hurt Me

"You are in danger of living a life so comfortable and soft, that you will die without ever realizing your true potential... Tell yourself the truth! That you’ve wasted enough time, and that you have other dreams that will take courage to realize, so you don’t die a fucking pussy."

"We live in a world with a lot of insecure, jealous people. Some of them are our best friends. They are blood relatives. Failure terrifies them. So does our success..."

"Denial is the ultimate comfort zone."

"The reason it’s important to push hardest when you want to quit the most is because it helps you callous your mind."

"If you want to be one of the few to defy those trends in our ever-softening society, you will have to be willing to go to war with yourself and create a whole new identity, which requires an open mind."

"We all need small sparks, small accomplishments in our lives to fuel the big ones. Think of your small accomplishments as kindling. When you want a bonfire, you don’t start by lighting a big log. You collect some witch’s hair—a small pile of hay or some dry, dead grass. You light that, and then add small sticks and bigger sticks before you feed your tree stump into the blaze. Because it’s the small sparks, which start small fires, that eventually build enough heat to burn the whole fucking forest down.”

― David Goggins, Can't Hurt Me: Master Your Mind and Defy the Odds

Get actionable takeaways and self-exploration exercises of one of my top recommended books of all times. Just enter your email below and it will be sent to you instantly for free.

* No fluff, No spam, You can always opt out

Apply What You Read
Get a free workbook of my top recommended books of all times, filled with in-depth insights, action points and self-exploration exercises. Just enter your email below and it will be sent to you instantly for free.

* No fluff, No spam, You can always opt out