I’m dying ‒ there’s no doubt about it… I’m freaking out. Is this really it? I'm in so much pain… it’s torture. Why won't it stop?

Air, where are you? I NEED you, like, I REALLY NEED you… maybe it's best if I just die ‒ it’s so painful... I'm deteriorating; I can feel myself deteriorating… my breath… it's down to gasping...stifling, suffocating gasping. My breath is getting shorter… weaker… soon it will all be over ‒ I'll be over.

Why can’t I keep my eyes open? My eyelids are so heavy… everything is so heavy, so slow. Take me off pause, please… press play. Please, just press play. I’m so drowsy. Why is everything getting darker?… This darkness is literally going to swallow me up…

Just an hour earlier, I had been running free, without a care in the world. As evening approached, I did what I had grown accustomed to doing. I put on my running gear, planning to do my usual evening run. Little did I know, as I finished tying the lace of my right shoe, the fate that lie ahead of me.

I set off in the direction of Ramat Hanadiv park, following a circuit I had run so many times before. 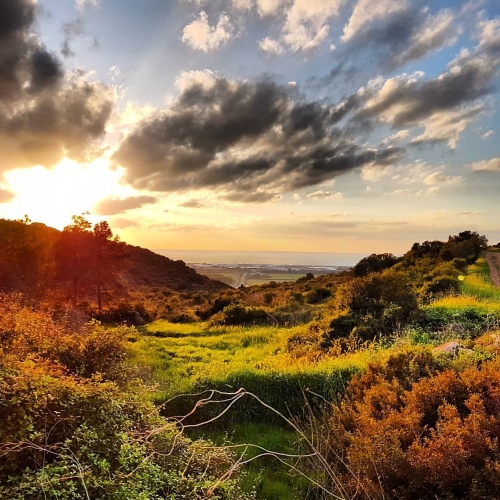 The play of light at that time of the evening was enchanting, highlighting the subtle nuances of colour we so often take for granted. I ran along the tracks, tracks made by the feet of those on the same mission as I was: to run free in Nature.
My run was enhanced by the challenge beyond the point where the route disappears into the raw, untamed part, into  the wild, where greenery camouflages rocks and trees, and you have to run and jump while dodging them to avoid getting scratched by the bushes.

When I'd finished running, I stopped at my usual spot to catch my breath. Not a second had passed before  I felt a stinging sensation in my right leg. As I glanced down to assess it, that's when I saw him… my snake.

The big, gray, slick creature showed no signs of leaving, so I slowly retreated to a safe distance before breaking into a sprint (and a sweat!) while calling my parents.
I knew only too well that the particular area where I was running was remote enough to be considered inaccessible by an ambulance. If I wanted to heighten my chances of survival, I would have to get myself to the road. But how?
Time was not on my side. Having just completed an intense run, my blood was pumping, really pumping... I knew the venom would course quickly through my veins. It had already ignited my survival instinct, which had prompted me to take flight while calling for help.

My parents were five hours away in another city, but, tellingly, they were the first ones I turned to in my time of crisis. Mom answered the phone, and the words burst out like a thunderstorm:

Mom, listen... I was bitten by a snake. Call an ambulance NOW, but I mean NOW.

What? Tal, what did you just say?

Mom, you're not listening, please call an ambulance NOW. I'll be at the entrance to Ramat Hanadiv in 20 minutes.

With that, I hung up and kept running... I had no doubt that the ambulance would find me. I knew Mom could explain the exact location, for she knew my route, since I used to do it almost everyday.
I was in shock; my body was in shock, but in many ways, for the first time in a long time, I was wide awake. Thoughts about Barcelona and my upcoming book launch, which had preoccupied my mind during my earlier run, had vanished. The snake had jolted me into a sense of presence. I was alone, totally alone, in one of the most beautiful places imaginable, and darkness, all manners of darkness, was closing in.

Adrenaline kicked in and I started to run like my life depended on it. My mind flooded with thoughts... What's going to happen? Should I do something else? Should I call anyone else besides my parents? When faced with the prospect of death, I saw no choice but to fight back with every fibre of my being.
I was running really fast now, knowing that I didn't have a lot of time left to play with. My mission was to get myself to the road. I was scared, so scared, but the fear propelled me forward.

By the time I reached the road, the consequences of my unexpected gift were taking their undeniable toll... My body that had carried me everywhere for four decades was beginning to shut down. I collapsed. I was exhausted in every possible way; physically and emotionally, I was crumbling. Numbness was setting in, and my breathing was laboured. Act 1 came to a dramatic conclusion on the roadside near Ramat Hanadiv, and behind the closed doors of the ambulance, Act 2 was just about to commence.

The journey to the hospital lasted a mere fifteen minutes, but to me it seemed unending. At that point, I really felt like I wasn't going to make it. What was happening to me? I was panicking, trying with every ounce of strength I had left in me to breathe. I was forcing myself to gulp air, egging myself on, willing myself to survive. My body was already going into anaphylactic shock, which meant that everything had started to swell. With blocked airways, how could I breathe? I knew I wasn't invincible, but I wasn't ready to give up; I was surrendering to the snake, but I wasn't ready to succumb to him. “To win the game, you have to live it…”

My vulnerabilities were highlighted, and I was undeniably exposed to the potential of dying. You could say I was laid bare, totally aware of my fragile reality, and yet I was still fighting. I was on my own ‒ it was me and my breath against the world, just trying to hang in there and still be part of it all. I spent the rest of the journey to the hospital choking and still gasping for breath. Even now, when I think back on it, the simple mantra “breathe” that I'd heard so many times in various yoga classes was about all that mattered... inhale, exhale... breathe in, breathe out... but something instinctive had been threatened by other forces operating against me. Something instinctive was becoming virtually impossible.

In the hospital, my body, with its swollen airways, eyes, and lips, was handed over to the care of the medical staff and to the drugs that would eventually work their way through my system. My body continued to wrestle with the snake's gift and tried to purge itself of it in the most unflattering ways imaginable. Vomit and a whole array of impressively nasty bodily fluids poured out of me. Such visual scenes of “rejection” that hospital staff witnessed would have had the regular me wincing in shame, but at that point my pride had been muted. I was beyond caring what anyone thought. If I was going down, I was going down fighting with everything I had left in me to give.

The light around me diminished. Everything was dark, but I was surrounded by openness. The darkness seemed limitless, and yet I sensed peace. I found myself observing everything from a distance. My hearing had changed as well. Earlier, I had been able to sense all the people around me and had heard their voices, but now they were confined to the background; they were fading out to static. The white noise was interrupted by two voices which came to the fore…  and then, it all played out between these two voices. Their exchange was the most enthralling aspect of this whole experience. In many ways, it decoded the message the snake had for me.

The voices went back and forth, debating the percentage I had given to life. It was surreal listening to it, hearing them discuss me, my percentage. But I was peaceful, everything was peaceful. There was no fear. It was unbelievable... to experience death and so much drama from a peaceful place. Life didn't forget me; it cradled me. 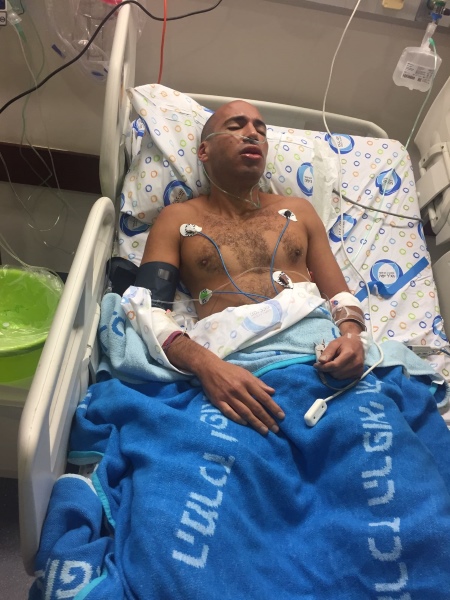 My body was caged in a bed in the E.R. and I found “myself” in another place, where everything seemed withheld. My way forward was hidden from me, but through losing the outside world, I discovered my inner one. When we become still, we can listen... truly listen. I took refuge in my remaining senses and opened myself up to the small miracles of my existence. We live to a large extent outside of ourselves, but without ever noticing it, we absorb the lessons from this ”living,” the effects of which leave inscriptions inside.

When the effects of the venom finally wore off, the realisation of all that had happened jolted me into a ”new” reality. I was back in the world but it was a different one. Something inside had shifted. I'd been given another chance, which compelled me to look at things from a deeper place. I was able to cut the crap and see what was important on a basic level.

It was in my peaceful darkness that everything was illuminated. In my marooned state, I could see behind the façade of my life, past all its labyrinths, to something deeper... to my essence. The snake in many ways served a deep, bittersweet kindness by offering me a chance to grow. His potentially deadly gift turned out to be a blessing in disguise. He communicated to me with an almost curious clairvoyant force the power to hear my own echo.

I knew there was a reason I hadn’t died; the message was clear: it’s time to give back. In mythology, snakes invoke bold meanings and imagery, but they also have a subtle, more secretive side. Their effective camouflage is symbolic of the shadow realms and hiding, and yet they simultaneously continue to be powerful symbols of rebirth and renewal, shedding their skin to achieve transformation, continuously emerging as newer versions of their former selves. 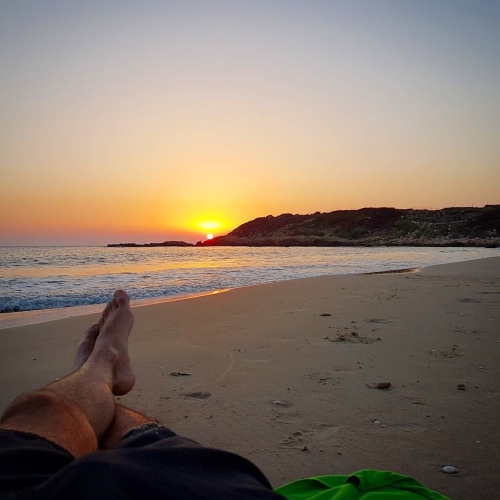 I now know that I, too, have to shed my skin. It’s easy to stay the same. There’s comfort in the known, but I can’t afford to fall victim once again to myself and my own little bubble. The snake gave me his poison, which brought me back to life— real life —the one I innately longed for.

* A big thank you to my parents who without them,I wouldn't have been here to tell the story and to my friends who've helped me with with the writing, editing and compiling of my memories. Bless you.