What is The Art of War About?

The Art of War is an ancient Chinese military treatise dating from the Late Spring and Autumn Period. The book contains a detailed explanation and analysis of the 5th-century BC Chinese military, from weapons and strategy to rank and discipline. Each chapter in the book is devoted to a different set of skills or art related to warfare and how it applies to military strategy and tactics. The Art of War has influenced both Far Eastern and Western military thinking, business tactics, legal strategy, and beyond. (The Art of War Summary)

The Art of War Quotes 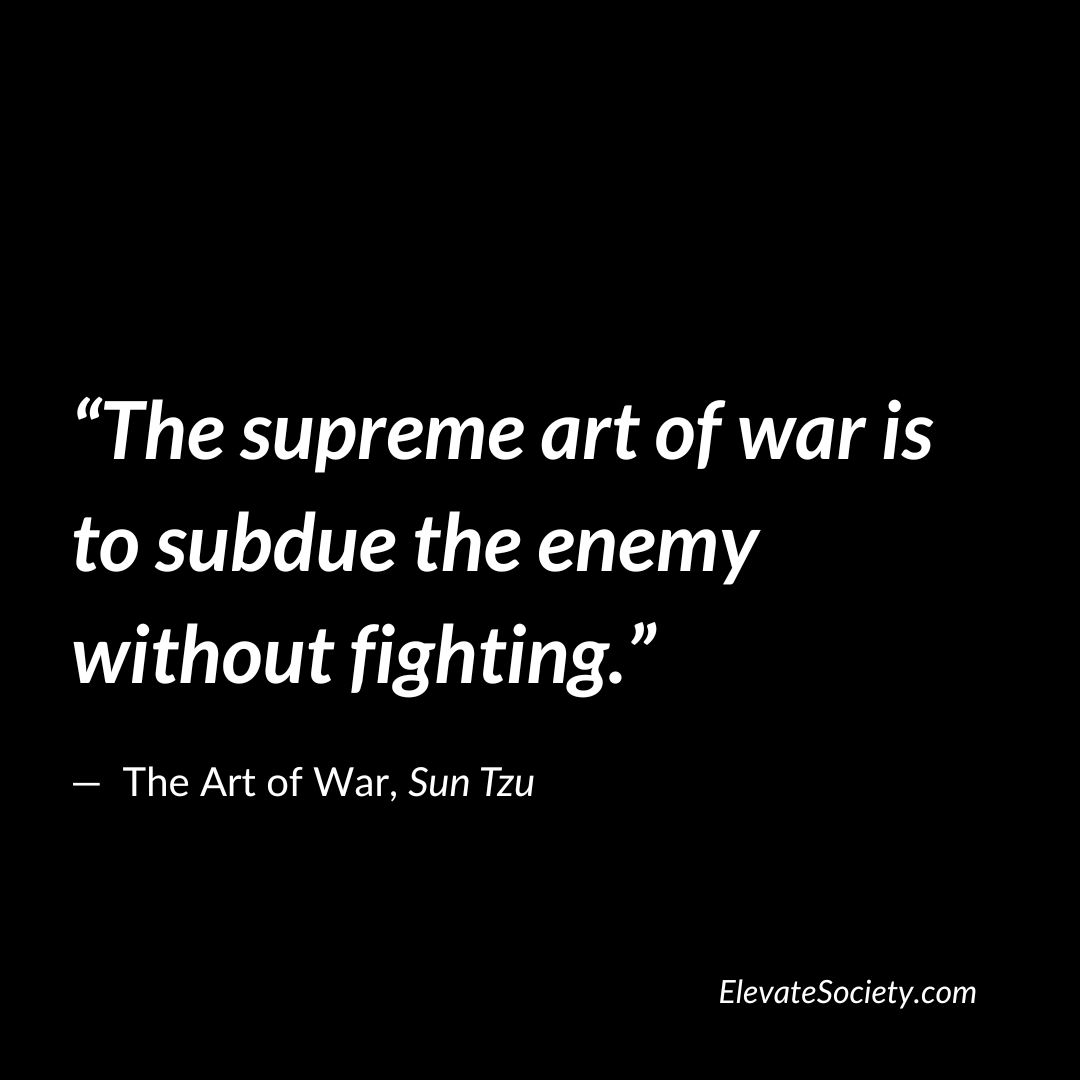 [Favorite Quote]: “The supreme art of war is to subdue the enemy without fighting.”

2. “In the midst of chaos, there is also opportunity”

5. “The greatest victory is that which requires no battle.”

6. “Let your plans be dark and impenetrable as night, and when you move, fall like a thunderbolt.”

9. “Treat your men as you would your own beloved sons. And they will follow you into the deepest valley.”

11. “When you surround an army, leave an outlet free. Do not press a desperate foe too hard.”

12. “If your enemy is secure at all points, be prepared for him. If he is in superior strength, evade him. If your opponent is temperamental, seek to irritate him. Pretend to be weak, that he may grow arrogant."

13. “The art of war is of vital importance to the State. It is a matter of life and death, a road either to safety or to ruin. Hence it is a subject of inquiry which can on no account be neglected.”

14. “Engage people with what they expect; it is what they are able to discern and confirms their projections. It settles them into predictable patterns of response, occupying their minds while you wait for the extraordinary moment — that which they cannot anticipate.”

15. “who wishes to fight must first count the cost”

16. “There is no instance of a nation benefitting from prolonged warfare.”

17. "The expert in battle moves the enemy, and is not moved by him.”

18. "He will win whose army is animated by the same spirit throughout all its ranks."

19. “Great results, can be achieved with small forces.”

20. “What the ancients called a clever fighter is one who not only wins, but excels in winning with ease.”

22. “Attack is the secret of defense; defense is the planning of an attack.”

24. “Anger may in time change to gladness; vexation may be succeeded by content. But a kingdom that has once been destroyed can never come again into being; "

25. “Bravery without forethought, causes a man to fight blindly and desperately like a mad bull. Such an opponent, must not be encountered with brute force, but may be lured into an ambush and slain.”

28. “Move not unless you see an advantage; use not your troops unless there is something to be gained"

29. “The worst calamities that befall an army arise from hesitation”

31. “if you fight with all your might, there is a chance of life; where as death is certain if you cling to your corner”

32. “Begin by seizing something which your opponent holds dear; then he will be amenable to your will.”

35. "The wise man delights in establishing his merit, the brave man likes to show his courage in action, the covetous man is quick at seizing advantages, and the stupid man has no fear of death.”

36. “Rewards for good service should not be deferred a single day.”

38. “The opportunity of defeating the enemy is provided by the enemy himself.”

40. “who does not know the evils of war cannot appreciate its benefits”

42. “He who advances without seeking fame, Who retreats without escaping blame, He whose one aim is to protect his people and serve his lord, The man is a jewel of the Realm”

43. “There are not more than five musical notes, yet the combinations of these five give rise to more melodies than can ever be heard.”

44. "Just as water retains no constant shape, so in warfare there are no constant conditions.”

46. “You can ensure the safety of your defense if you only hold positions that cannot be attacked.”

47. “He who only sees the obvious, wins his battles with difficulty; he who looks below the surface of things, wins with ease"

48. “If those who are sent to draw water begin by drinking themselves, the army is suffering from thirst. One may know the condition of a whole army from the behavior of a single man."

49. “We cannot enter into alliances until we are acquainted with the designs of our neighbors”

50. “It is the unemotional, reserved, calm, detached warrior who wins, not the hothead seeking vengeance and not the ambitious seeker of fortune.”

― Quotes from the book The Art of War by Sun Tzu

Who is the Author of The Art of War?

Sun Tzu was a Chinese general, military strategist, writer, and philosopher who lived in the Eastern Zhou period of ancient China. Sun Tzu is traditionally credited as the author of The Art of War, an influential work of military strategy that has affected both Western and East Asian philosophy and military thinking.