Does going to work feel like an obligation or an adventure?

By refusing to settle for the first answer, Sean Ogle found the freedom to make a living -- not just a paycheck.

When he started Location 180 in 2009, the only certainty in Sean’s life was that his desk job would never enable him to live the life he wanted. So he quit, moved to Thailand, and created his own business by doing the things that he enjoys. Now Sean is empowering fellow “location rebels” to do the same for themselves.

check out my interview with this inspiring location-independent entrepreneur

1. Hey Sean, How did you become a location Independent entrepreneur? Why did you decide to leave your career and why was this the absolute breaking point?

It was kind of on accident. I started L180 because I wanted to make a big change in my life, and via that, Dan Andrews of the Tropical MBA found me and offered me an internship working with him in Asia. That’s what started me down the path of lifestyle entrepreneurship.

As for the breaking point, it was on a trip to Brazil that I’d saved up for a year, where I realized I wanted to do more travel and I wanted to build something for me - not my boss. Thats when I started the blog and started making steps to change up my lifestyle.

2. Once you made your decision, did you look back? How did you make the mental shift from job security to uncertainty? Or, from one paycheck to multiple sources of income?

I wouldn’t say I ever looked back, but there were certainly those “oh my God, what the hell am I doing moments.” Luckily those just pushed me to work harder and actually make htis whole thing work. 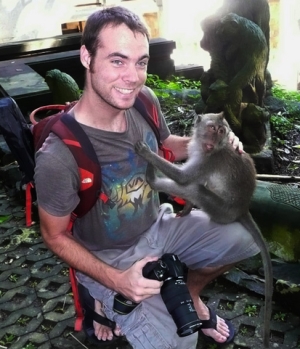 When I left my job, my initial goal wasn’t even to start a business right away. It was to travel the world and then see what happened. So when I moved to Thailand and I was bringing in a little bit of income it was actually a nice surprise. I could live cheap, and I wasn’t expecting to have any income - so for that reason focusing on business as opposed to just adventure was a good move.

The secret to multiple sources of income, is not to try and have multiple streams of income when you’re just starting.

I worked on building one thing, and when that was stable, I’d consider starting something else. Otherwise you bounce around too much and dont make enough progress on any one project for it to be sustainable.

3. When you moved to Thailand to start your new life, did you have any expectations? How did this location prove to be the right starting point for you?

I expected adventure. Something different. Aside from that I dont think I had any clue what I was getting myself into.

It proved to be the perfect starting point for a few reasons:
- You couldnt walk out your door without experience something different than what you’re used to
- It was super cheap to live
- It was easy to travel all over the region for cheap.
- There were a ton of other entrepreneurs living there that were in similar situations to me

4. Your experience as a financial analyst must have come in handy as you made your business plans. What other skill sets did you have to build to launch yourself as an entrepreneur?

To be honest, pretty much nothing from my finance background was useful in planning the trip. I had about $10k saved up and I just went for it.

Other helpful skills were basic SEO, copywriting, social media and WordPress. Because regardless of what you do online, each of those can be beneficial. And you can freelance any of them to earn side income early on.

5. How did you design Location 180 to achieve your initial goals? How has it evolved since then?

At first the whole point of Location 180 was to hold myself accountable for the things I wanted to do in my life. Travel, start a business, and do the things on my bucket list.

Since then it’s evolved from just holding myself accountable to helping other people do the things they want in life through the power of entrepreneurship.

It’s come a long way since my first 6 months of clueless blog posts, but seeing the hundreds of other people that have built successful businesses with help from the site really makes it all worth it.

6. To what extent was starting a blog the first step in your journey? How did you help people find you?

It was the absolute most important step I ever could have taken. Without it, my life would look nothing like what it does now.
Early on I did a lot of reaching out and relationship building with other bloggers. Emails, comments, guest posts. Thats how I initially got exposure. From there it just kind of took on a life of its own.

7. When did you realize that you wanted to help others achieve the freedom of location independence? What did you learn in creating and launching Location Rebel?

From the moment I touched down in Thailand for the first time, I knew I wanted to continuing doing this. Once I realized how possible the whole lifestyle business thing was, I knew I needed to do something around that.

I got the idea for Location Rebel about a year before I actually built it. It evolved from doing 25-30 less in depth blueprints, to launching with 8 very detailed blueprints (we’ve since grown to 14).

8. What are some of the challenges of turning personal experience into content that is useful to others?

I think the biggest challenge is getting over your own insecurities about doing it.

Often so many people think that no one cares what they have to say. Sure a lot of people won’t, but many people will, so you have to get over your fear of talking about yourself.

One other thing reason that I’ve been successful is the fact that I’m pretty honest with my writing. I talk about both the good and the bad and I’m not afraid to be vulnerable with my audience. A lot of people have a tough time with that, and because of it, will have a difficult time building their readers trust.

The biggest thing is it has kept me motivated to keep doing interesting things that are worth writing about.

For over 10 years I’ve wanted to ski the back bowls of Vail. I took a trip a couple years ago and there was ZERO snow. Literally the bowls were dirt.

So as I’m writing this I’ve been in Vail for about 4 hours. Tomorrow morning I’ll be knocking that one off the list.

Sean Ogle is a location independent entrepreneur, world traveler, and blogger at Location 180. You can also find him on Twitter @seanogle