This is a summary review of Quiet containing key details about the book.

What is Quiet About?

Quiet, a nonfiction book, argues that modern Western culture misunderstands and undervalues the traits and capabilities of introverted people, leading to "a colossal waste of talent, energy, and happiness". The book offers advice to introverts for functioning in an extrovert-dominated culture; and offers advice in communication, work, and relationships between people of differing temperament.

Adopting scientific definitions of introversion and extroversion as preferences for different levels of stimulation, Quiet outlines the advantages and disadvantages of each temperament, emphasizing the myth of the extrovert ideal that has dominated in the West since the early twentieth century.

Who is the Author of Quiet?

Susan Horowitz Cain is an American writer and lecturer. Her writing has appeared in The New York Times, The Atlantic, The Wall Street Journal, and many other publications. Cain has also spoken at Microsoft, Google, the U.S. Treasury, the S.E.C., Harvard, Yale, West Point and the US Naval Academy. 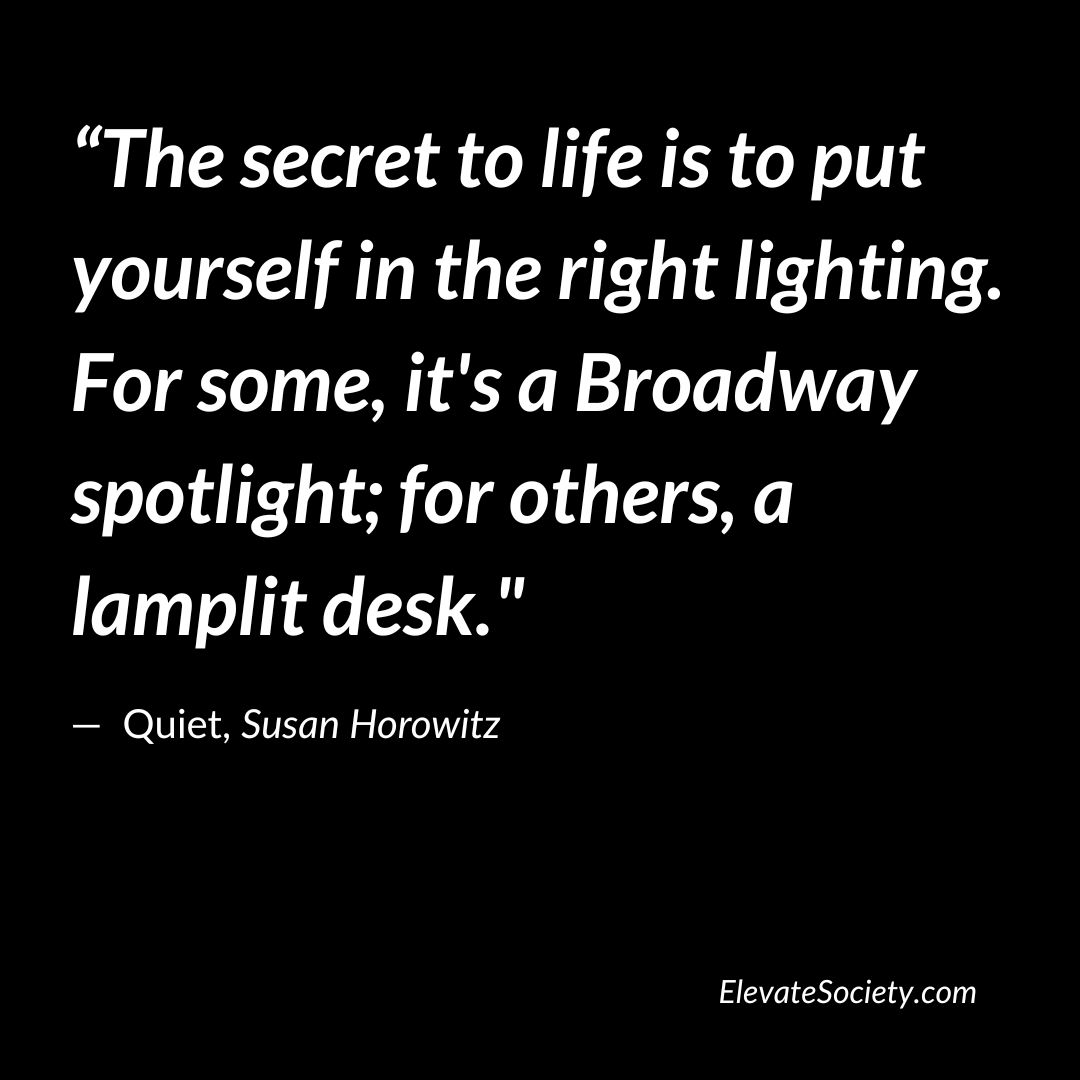 [Favorite Quote]: “The secret to life is to put yourself in the right lighting. For some, it's a Broadway spotlight; for others, a lamplit desk."

What are key takeaways from Quiet?

Takeaway #1 What Makes You An Introvert or Extrovert?

Whether we're introverted or extroverted is defined by how the emotional switch in our brain, our almond-sized amygdala, reacts to stimuli - People who are introverts have a stronger response to external stimuli than extroverts.

This was proven in an experiment on infants when cotton swabs were covered in alcohol and held under the infants' noses whilst a recording of balloons being popped was played. 20% of the infants' reacted to the experiment by kicking and screaming, their pulse and blood pressure spiked putting them in the 'highly reactive' category, aka introverted. 40% of the infants' remained cool and calm whilst this stimuli was being presented to them, these 40% being placed in the low-reactive category I.e these infants being the extroverts.

This is why the introverts seek out calm and quiet environments where they can usually have some control over the stimuli whilst the extroverts, who don't respond nearly as much to new impressions, seek out more and more stimulating environments whether they're clubbing or jumping out of a plane.

But just because introverts are sensitive and seek out peaceful environments with limited stimulants, not putting themselves forth to be seen and heard, doesn't mean they're shy. Being shy means you're afraid of being judged negatively, it means you care what people think of you. It's very possible to have shy extroverts as well as shy introverts.

Takeaway #2 Being an Introvert In The Western Working World

It's not easy for introverts to thrive and succeed in the Western world when extroverts are setting the tone, demanding all the attention, and doing all the talking and therefore, often seen as being more cooperative, more interesting, more intelligent and ultimately, more successful.

It's only in the last 150 years in the USA and Europe that extrovertism has prevailed, this due to the 20th century shift that saw more people leaving their close-knit towns and villages for the city. Rural values where it was enough to be honest and hard working were left behind as it became a dog-eat-dog world in order to make it in the city.

In the workplace today you'll find that open-plan offices, group brainstorming sessions, and PowerPoint presentations are everywhere – These being the 'ideal environment' for extroverts to thrive an environment which most employers think their employees do their best work. But introverts do their best work when alone, just look at Steve Wozniak who built the first personal computer at home, or Isaac Newton who formulated the law of gravity alone.

If you're a CEO you need to have a mix of introverts and extroverts to have your company flourish, but you need to take care of both sides needs and preferences. Consider if you need a quick decision or a careful decision to be made – An extrovert is perfect when you need to accomplish a simple task fast or come to a fast decision because the extrovert will manage the team to ensure everyone is pulling together working on the same task. However, the extrovert won't listen to a different/better way of achieving the goal as they make fast decisions based on little information, this is where introverts thrive. An introvert will take other peoples thoughts and ideas into careful consideration before making a final decision that is less likely to have flaws and fail.

When introverts and extroverts interact conflict can arise due to misunderstandings. A misunderstood extrovert will grow hostile and become offensive, overpowering the introvert who will retreat from such hostility. This is why both types need to be open and honest with each other, discuss differences of opinion and explain themselves – The introvert isn't disinterested as the extrovert presumes, they just aren't prepared to put themselves into the hostile environment in order to 'win the fight'.

In order to succeed in certain moments of business and indeed life, every introvert must learn to flip the switch and become a temporary extrovert whether for an hour or a day. Extroverts can inspire people, they get their voice heard, and accomplish whatever it is they are going after quickly and easily.

To do this, introverts just need to learn and display some typically extrovert actions – Speak clearly, walk confidently (take up space with your body – don't cross your arms and make yourself small!) put on a nonchalant air and keep your posture relaxed at all times. After you've completed what you set out to do you can put the switch back and rush to your quiet place to replenish your need for tranquility!

What are the chapters in Quiet?

Chapter One - The Rise of the "Might Likeable Fellow": How Extroversion Became the Cultural Ideal
Chapter Two - The Myth of Charismatic Leadership: The Culture of Personality, a Hundred Years Later
Chapter Three - When Collaboration Kills Creativity: The Rise of the New Groupthink and the Power of Working Alone
Chapter Four - Is Temperament Destine?: Nature, Nurture, and the Orchid Hypothesis
Chapter Five - Beyond Temperament: The Role of Free Will (and the Secret of Public Speaking for Introverts)
Chapter Six - "Franklin Was A Politician, but Eleanor Spoke Out of Conscience": Why Cool Is Overrated
Chapter Seven - Why Did Wall Street Crash and Warren Buffet Prosper?: How Introverts and Extroverts Think (and Process Dopamine) Differently
Chapter Eight - Soft Power: Asian-Americans and the Extrovert Ideal
Chapter Nine - When Should You Act More Extroverted Than You Really Are?
Chapter Ten - The Communication Gap: How to Talk to Members of the Opposite Type
Chapter Eleven - On Cobblers and Generals: How to Cultivate Quiet Kids in a World That Can't Hear Them

What is a good quote from Quiet?

Here's what one of the prominent reviewers had to say about the book: “Charm and charisma may be one beau ideal, but backed by first-rate research and her usual savvy, Cain makes a convincing case for the benefits of reserve.” — Harper’s Bazaar

What is The "Extrovert Ideal"?

The author says Western, and in particular, American, culture is dominated by what she calls the "Extrovert Ideal", described as "the omnipresent belief that the ideal self is gregarious, alpha and comfortable in the spotlight".

Western societies, being based on the Greco-Roman ideal which praises oratory, favor the man of action over the man of contemplation, and view introversion as being between a disappointment and pathology.

In contrast, traditional, pre-Americanized Asian culture is more inclined to value reticence and caution. The Harvard Independent's Faith Zhang remarked that Quiet seems in part a gentle rebuke to a culture that values style over substance.

Who is an introvert?

Cain's definition is that introverts have a preference for a quiet, more minimally stimulating environment. Introverts tend to enjoy quiet concentration, listen more than they talk, and think before they speak, and have a more circumspect and cautious approach to risk. Introverts think more, are less reckless and focus on what really matters—relationships and meaningful work.

Conversely, extroverts are energized by social situations and tend to be assertive multi-taskers who think out loud and on their feet.

Cain distinguishes introversion from superficially similar personality traits, in particular charging the perceived identity between shyness and introversion to be a huge misconception. She explains that shyness is inherently uncomfortable but introversion is not.

Cain notes that between one-third and one-half of Americans may be classified as introverts, though individuals fall at different places along an introvert-extrovert spectrum. People falling near the middle of the spectrum are called "ambiverts".

How to become more quiet?

According to Cain, in a culture that is biased against them, introverts are pressured to act like extroverts instead of embracing their serious, often quiet and reflective style. Cain listed six self-help strategies introverts may use to nourish their strengths, including "talking deeply", working alone, reading others' works ("a deeply social act"), listening well, taking mini-breaks from overstimulating environments, and practicing "quiet commitment".