This is a summary review of Sapiens containing key details about the book.

What is Sapiens About?

Sapiens is a book about the history of our species. The book spans the history of humankind, from the very first humans to walk the planet to us today, and explores what it means to be human by investigating the past, observing the present, and looking to the future.

The book's main argument is that Sapiens came to dominate the world because it is the only animal that can cooperate flexibly in large numbers. The author argues that the ability of Sapiens to cooperate in large numbers arises from their unique capacity to believe in things existing purely in the imagination, such as gods, nations, money, and human rights.

Who is the Author of Sapiens?

Prof. Yuval Noah Harari is a historian, philosopher, and the bestselling author of Sapiens. He has a PhD in History from the University of Oxford and lectures at the Hebrew University of Jerusalem, specializing in world history. His books have been translated into more than 60 languages, with over 35 million copies sold worldwide. 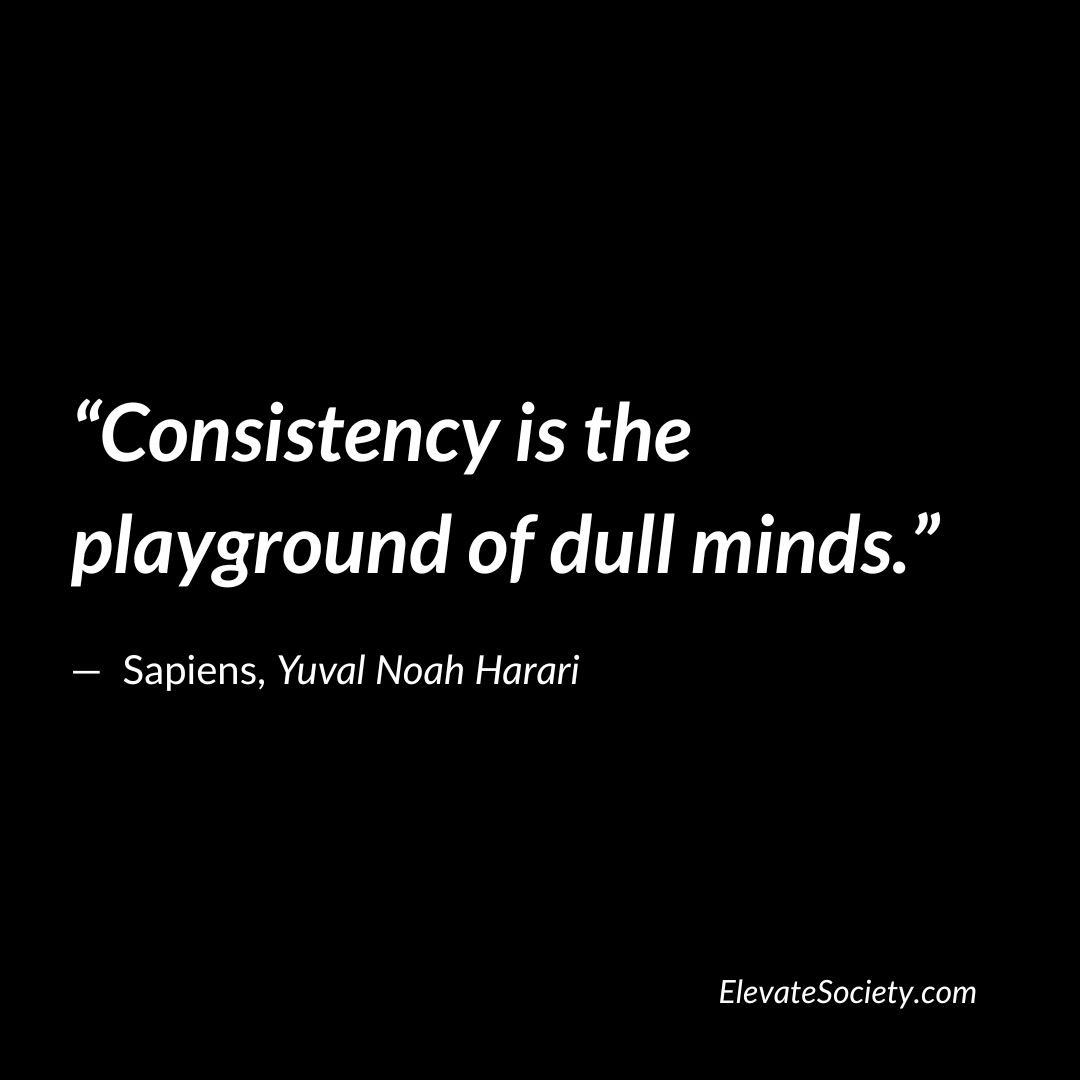 [Favorite Quote]: “Consistency is the playground of dull minds.”

What are key takeaways from Sapiens?

Evolving from a genus of great apes some 2.5 million years ago in East Africa, early humans (Homo rudolfensis and Homo erectus) migrated to more promising lands which, due to adapting to their new environment, resulted in new forms of Homo eventually leading to modern humans, Homo sapiens, who walked the land some 300,000 years ago. All other human species died out so why did Homo sapiens survive when there was nothing particularly special about them, what gave us the upper hand?

The Interbreeding Theory that is backed up by DNA (modern European humans having 1% to 4% of Neanderthal DNA) suggests that the different species gradually merged together due to breeding. Another theory is the Replacement Theory which suggests that other species died out due to Homo sapiens possessing slightly superior skills allowing them to kill the other humans off whether by taking away their food sources or more violent means.

Both theories are likely to be partly correct, all of this made possible thanks to an evolutionary leap some 70,000 years ago which saw Homo sapiens gain brain improvement known as Cognitive Revolution allowing them to develop language and not only to outperform their rivals with more complex forms of hunting, more advanced communities, and the establishment of primitive trade networks but also to expand into remote corners of the globe.

Takeaway #2 From Forager to Farmer

Leading a nomadic hunting and foraging lifestyle until 12,000 years ago, the agricultural revolution saw humans transformed from foragers to farmers with an explosion in population growth. Within 10,000 years almost all humans had entered into the world of agriculture but with farming so time consuming, compared with the former hunter gather lifestyle, it is puzzling why our ancestors made this radical shift especially when you take into account the poor quality food they were producing which lacked the nutrients which were readily available in the form of animals, nuts and berries. As before, two theories exist. The first is that the change to agriculture was gradual, the process becoming ingrained with each generation so that by the time it was realised that farming had its downsides, it was too late to turn back to the hunter gatherer lifestyle. Secondly, despite its faults, farming was efficient with an increase in food which was much needed to sustain the population growth.

Due to people no longer living hand to mouth, different trades such as blacksmithing and weaving became common practise which saw the the bartering system invented with a shovel, for example, traded for food allowing the farmer to farm more effectively using the tools he needed and the blacksmith to feed himself and his family. However, there were only so many tools farmers needed meaning the simple bartering system soon became inadequate.

Takeaway #3 Why Writing Was Invented

As trading became more complex (how could you ensure a pig farmer would keep his word and give you your meat if you had already given him the knife he needed to slaughter it with?!) enter the occurrence of writing and money around 3,000 BC with the Sumerians of Mesopotamia using barley money as what is thought to be the first standardised method of payment, this resulting in laws and authority systems to ensure that people's behaviour was regulated, this ultimately leading to hierarchical societies.

Takeaway #4 Why The Last Decades Have Been the Most Powerful

The scientific revolution that took place in the 16th-17th centuries in Europe saw humans acquiring new knowledge, taking progress into their own hands rather than relying on an almighty god to determine their future. Experimentation, exploration and observation allowed humans to make gigantic leaps in the fields of medicine, physics, and astronomy whilst discovering previously unknown lands which held valuable resources such as gold resulting in countries building great empires and later, the creation of capitalism and globalization, the latter helping to make the world more peaceful.

We can only imagine where our Homo sapien story will end, perhaps with the invention of a brand new species; the superhuman?!

What are the chapters in Sapiens?

What is a good quote from Sapiens?

"...the root of suffering is neither the feeling of pain nor of sadness nor even of meaninglessness. Rather, the real root of suffering is this never-ending and pointless pursuit of ephemeral feelings, which causes us to be in a constant state of tension, restlessness and dissatisfaction. Due to this pursuit, the mind is never satisfied. Even when experiencing pleasure, it is not content, because it fears this feeling might soon disappear, and craves that this feeling should stay and intensify. People are liberated from suffering not when they experience this or that fleeting pleasure, but rather when they understand the impermanent nature of all their feelings, and stop craving them."

What is the history of Sapiens?

Harari surveys the history of humankind in the Stone Age up to the twenty-first century, focusing on Homo sapiens. He divides the history of Sapiens into four major parts:

Here's what one of the prominent reviewers had to say about the book: "Yuval Noah Harari’s full-throated review of our species may have been blurbed by Jared Diamond, but Harari’s conclusions are at once balder and less tendentious than that of his famous colleague." — New York magazine