This is a summary review of The 48 Laws of Power containing key details about the book.

What is The 48 Laws of Power About?

Drawn from 3,000 years of the history of power, The 48 Laws of Power is a guide to help readers achieve for themselves what many powerful leaders learned the hard way. The 48 laws are illustrated through the tactics, triumphs and failures of great figures from the past who have wielded - or been victimised by power.

Who is the Author of The 48 Laws of Power?

Robert Greene is an American author of books on strategy, power, and seduction. He has written six international bestsellers: The 48 Laws of Power, The Art of Seduction, The 33 Strategies of War, The 50th Law, Mastery, and The Laws of Human Nature. 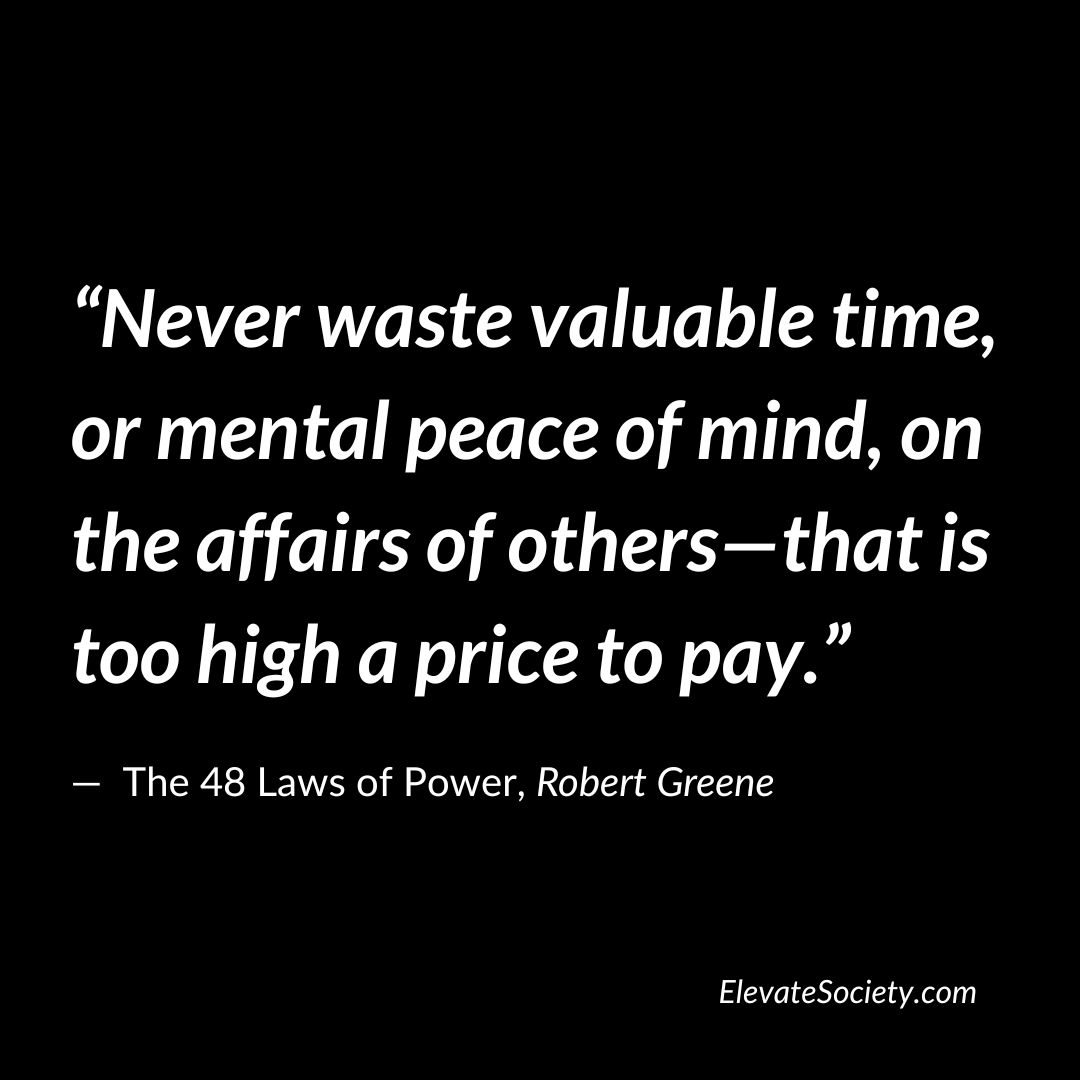 [Favorite Quote]: “Never waste valuable time, or mental peace of mind, on the affairs of others—that is too high a price to pay.”

What are key takeaways from The 48 Laws of Power?

Powerful people like to be the center of attention so in order to impress them you shouldn't outshine them as this will make them feel threatened instead, you should ensure you shine the light on them to make them look better and smarter than everyone one, including yourself.

To become powerful you will likely have to use other people's work to your advantage. Stealing is a strong word to use but if you have ever plagiarized someone's work or copied an answer know that you're not alone as even Thomas Edison used employee Nikola Tesla's work to further his breakthrough of the dynamo, claiming Tesla's hard work as his own. This is why it's so vital for you to claim credit for your work, whether you've invented something, written a book, or written a speech – claim your idea or work before someone else does!

When struggling to outsmart your competition, gather as much information as you can about the company or individual. You'll need to befriend the enemy in order to outpower them, this way you can discover their weaknesses, plans, and desires whilst, in time, influencing their decisions. Hiring informants is one way to gather information but is risky – how will you know if they're a double agent and that the information is reliable? Therefore, it's better to be your own spy. If the tables are turned (and you should presume they are!) you can act unpredictably to gain the edge over your competitor, this will leave them confused and floundering far behind as they try to work out what you're up to whilst you steam ahead.

When faced with an opponent that you know is stronger than you, it's ok to surrender as you will be able to gain power later - Avoid fighting for the glory when you know you don't have a hope of coming out on top and your competitor knows it too. By surrendering this time, you're not giving up altogether – use this opportunity to regroup so you come back fighting stronger next time.

To be treated superiorly you need to act more superior than your colleagues, however, by doing this you'll breed contempt in them. Therefore, you need to get people to treat you like royalty – don't let them see you acting superiorly, be superior so that they assume there's good reason for you to be treated so!

Seduction is always better than using force and coercion when gaining power over others. Even though force can often be the easier option, it breeds resistance in people as they being to resent you. Seduction on the other hand, allows you to control people by playing on their emotions, people will become indebted to you when you treat them well and will ultimately 'jump' as soon as you say the word!

What are the chapters in The 48 Laws of Power?

What is a good quote from The 48 Laws of Power?

"Never waste valuable time, or mental peace of mind, on the affairs of others—that is too high a price to pay... What you do not react to cannot drag you down in a futile engagement."

Here's what one of the prominent reviewers had to say about the book: "Machiavelli has a new rival. And Sun Tzu had better watch his back. Greene . . . has put together a checklist of ambitious behavior. Just reading the table of contents is enough to stir a little corner-office lust.” — New York magazine