This is a summary review of The Four Agreements containing key details about the book.

What is The Four Agreements About?

The Four Agreements is a self-help book. It advocates freedom from self-limiting beliefs that rob us of joy and creates needless suffering. The book offers a robust code of conduct that can rapidly transform our lives into a new experience of freedom, happiness, and love.

According to the author, everything a person does is based on 'agreements' they have made with themselves, with others, with God, and with life itself. In these agreements, people may tell themselves who they are, how to behave, what is possible, and what is impossible.

The book states that these self-limiting agreements are what create needless suffering. The author also believes that to find personal joy, one must get rid of society-imposed and fear-based agreements that may subconsciously influence the behavior and mindset of the individual.

The author identifies sources of unhappiness in life and proposes four beneficial agreements that one can make with oneself to improve one's overall state of well-being. By making a pact with his suggested four key agreements, an individual is able to dramatically impact the amount of happiness they feel in their lives, regardless of external circumstances.

Who is the Author of The Four Agreements?

Miguel Ángel Ruiz Macías, better known as Don Miguel Ruiz, is a Mexican author of Toltec spiritualist and neoshamanistic texts. His work is best-received among members of the New Thought movement that focuses on ancient teachings as a means to achieve spiritual enlightenment. 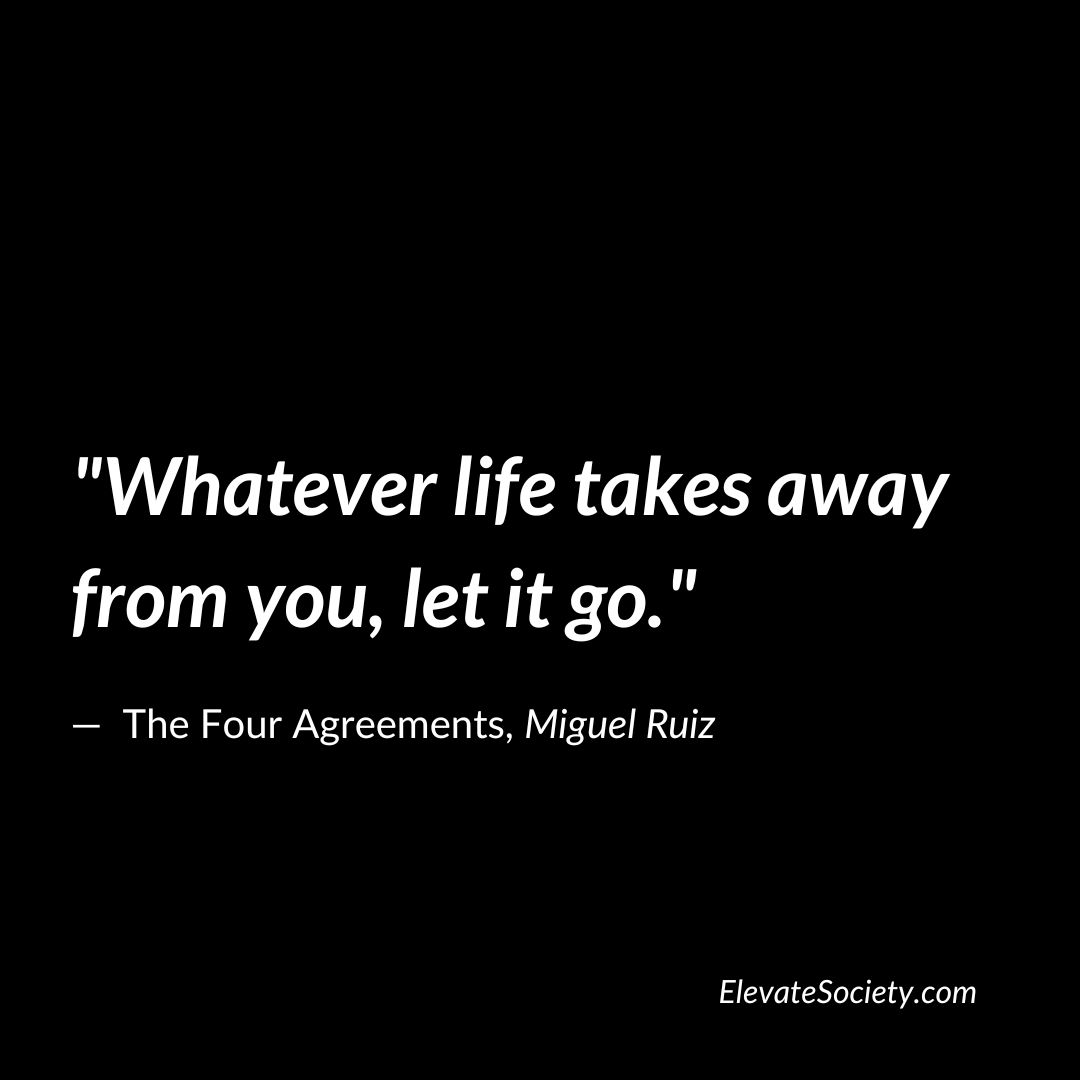 [Favorite Quote]: "Whatever life takes away from you, let it go."

What are key takeaways from The Four Agreements?

The rules or 'social agreements' handed down by society domesticate us to living by the social norms not questioning why, just believing we have been taught correctly what is good and bad, right and wrong from parents, teachers, and our friends. As children we are rewarded for obeying and punished for disobeying, we learn not to overstep the mark, ultimately, we surrender so as not to feel rejected, blamed, or judged. Somewhere along the way, we don't need to be controlled anymore because we have learned the rules and abide by them, and when we don't we do a great job at punishing ourselves. It is possible to break free from the structure we've become so used to by making 4 new agreements with ourselves.

Takeaway #2 Be Impeccable With Your Word

Never use your words against others nor yourself. This means no more blaming, no more judging, and remembering how much power our words hold over us as well as others. Use words of love and encouragement instead of hate and blame. When you say something out of annoyance or anger the other person can believe that what you said is true and it can affect them for years to come, making them believe they can't do something or shouldn't act a certain way.

Don't believe that everything is about you because that couldn't be further from the truth. Falling into the trap of personal importance comes from being domesticated by society but if you learn to step back and see it from the other persons point of view you can learn that they were acting from their own belief and their own point of view at that moment – It's about them, not you. When you know who you are and you love and trust yourself you won't take the opinions of others so much to heart.

How many times have you thought there was a problem when there wasn't? Making assumptions causes problems, and more often than not they're based on nothing but our wild imaginations. It's not only with other people where we make assumptions but ourselves too, assuming we can't do something because we tried it once and failed. Stop assuming and start asking questions instead – Ask the other person if they're angry with you. Ask them if they could please help you with a certain task (remember that people are not mind readers), and question yourself – could you do that thing if you tried some more?

Takeaway #5 Always Do Your Best

This is 1 rule from childhood that does need to remain. If you give a task or goal all you've got and try your very hardest you've nothing to regret. It's vital that you do your best for your own sense of well being rather than because someone else wants you to. Work is a great example, when you are expected to do your best by your boss but you don't feel motivated or passionate you will struggle. When you do your best because you're driven to, you will flourish.

What are the chapters in The Four Agreements?

What is a good quote from The Four Agreements?

“Whatever happens around you, don't take it personally... Nothing other people do is because of you. It is because of themselves.”

Is The Four Agreements worth reading?

We give the book a thumbs up. 👍

What are the 4 agreements?

The Four Agreements are as follows:

Agreement 1: Be Impeccable With Your Word - Being impeccable with language means to take responsibility for one's actions and remain without judgment against oneself and others. In essence, this agreement focuses on the significance of speaking with integrity and carefully choosing words before saying them aloud. Ruiz states that while this agreement is the most important, it is the most difficult one to honor.

Agreement 2: Don't Take Anything Personally - The second agreement advocates the importance of having a strong sense of self and not needing to rely on the opinions of others in order to be content and satisfied with their self-image. Ruiz believes that anger, jealousy, envy, and even sadness can lessen or dissipate once an individual stops taking things personally. He mentioned that each individual has a unique worldview that alters their own perceptions, and that the actions and beliefs of a person is a projection of their own personal reality.

Agreement 3: Don't Make Assumptions - The third agreement describes how making assumptions can lead to suffering, and why individuals should not partake in making them. When one assumes what others are thinking, it can create stress and interpersonal conflict because the person believes their assumption is a representation of the truth. Individuals can avoid misunderstandings, sadness, and drama by not making assumptions and ensuring that the communication is clear between the persons involved.

Agreement 4: Always Do Your Best - The fourth agreement entails integrating the first three agreements into daily life and also living to one's full potential. It involves doing the best that one can individually manage, which varies on the different situations and circumstances that the individual may encounter. Ruiz believes that if one does their best in any given moment, they will be able to avoid self-judgment and regret.

Here's what one of the prominent reviewers had to say about the book: "This book by don Miguel Ruiz, simple yet so powerful, has made a tremendous difference in how I think and act in every encounter.” — Oprah Winfrey